I hear a lot of stories these days about the so called ‘entitled’ millennial. The latte-sipping, avocado toast eating young person who would rather spend $250 on a pair of jeans, than save for a house deposit. The old chestnut that young people just need to stop wasting money, work harder and stop complaining about house prices if they want to pull together a deposit.

What a load of crap.

Let’s be blunt; millennials have a lot to be grateful for. We live in an age where life expectancy continues to rise, we’re tech natives and we have all the opportunities in the world to travel or shift across the globe. It’s a pretty good time to be alive.

But I absolutely dispute the assertion that young people are entitled simply because they want to also one day own a roof over their head.

Let’s break down the numbers. In 2002, house prices were 3x the average household income across New Zealand, and 4x the amount in Auckland. Not bad. You could work hard in an average paying job and still pull together enough for a deposit and service a mortgage. It wasn’t an easy task, but it wasn’t an unclimbable mountain. You could realistically get there.

So what are we facing now? Well in 2019, house prices are 6.5x the average household income across New Zealand, and a whopping 9x the amount in Auckland. That’s a significant increase.

An Auckland couple earning a joint income of $95k a year would be facing an average house price of $850,000. A full year’s income only just covers 1/10th of the price of the house. When you factor in that most mortgages require a 15 to 20 per cent deposit (essentially a whole year’s worth of income) and that sky-rocketing rents and living costs are severely impacting our ability to save, you can see where the problem begins.

Young people are genuinely struggling to pull enough together to get a foot in the door of the housing market.

It’s no longer acceptable for a baby boomer to tell a millennial to work harder, when the fact of the matter is the goal posts have shifted. We’re no longer comparing apples to apples. The income to house price difference has increased so dramatically that purchasing your first home now compared to in the 1980s is not even the same game. Young people are shut out, yet there’s a consistently vocal group of people who seem to think that’s just the way it is. Time to move on.

But it is not time. This is an inter-generational equity issue.

Now don’t get me wrong. I don’t take the view that buying a house should be easy. You should absolutely work hard, scrimp and save to get your deposit together. Purchasing a first-home should be a big accomplishment and recognised as such. But what it shouldn’t be, is inequitable. Under current settings, the dream of owning a home is simply that: a dream. And it’s starting to create a generation that’s resentful of those who have gone before them.

This is an area that requires urgent action, or we will truly lock an entire generation out of home ownership. Calling them entitled millennials for challenging the status-quo will not help solve the problem.

To date, neither of New Zealand’s largest political parties have done enough to solve the issue. The housing market rise began under Labour, continued under National and has kept on running under the Coalition government. MPs and Ministers need to do better for young people. We deserve a fair crack at it, and right now that is not happening. It’s time to pivot away from the “she’ll be right” mentality.

It’s time to throw down a challenge for New Zealand’s political parties. Whoever can develop a sustainable and effective way to solve this housing crisis has a chance to secure the millennial vote in years to come. This inter-generational issue poses a real problem, but also a real opportunity for whoever dares to tackle it head on and deliver affordable housing for all New Zealanders. 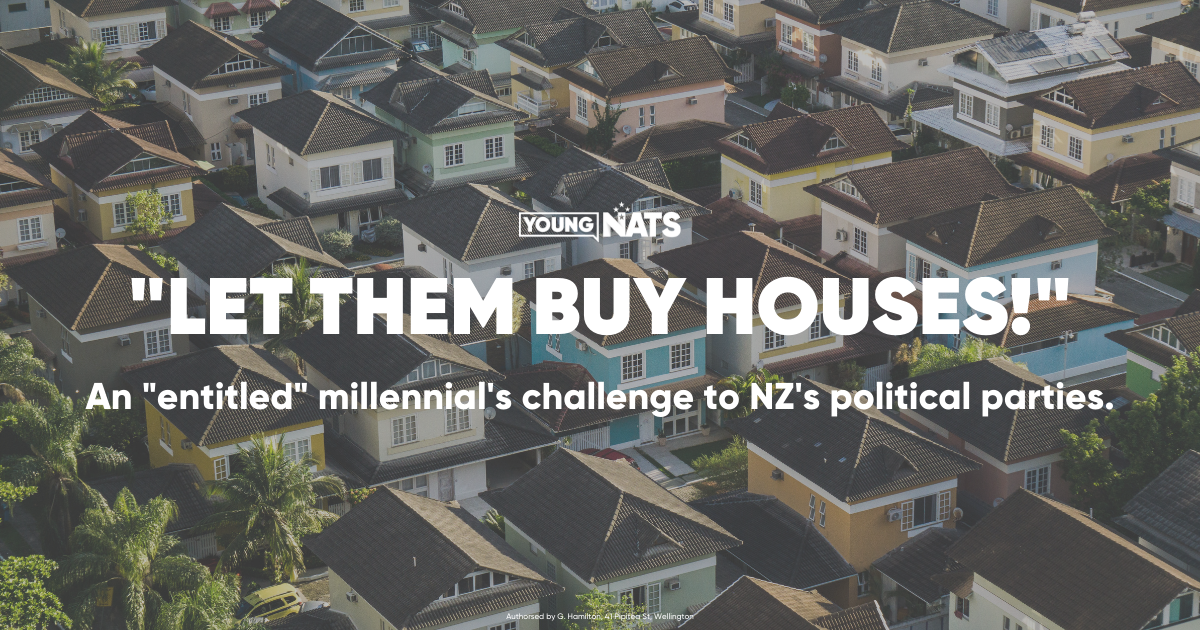