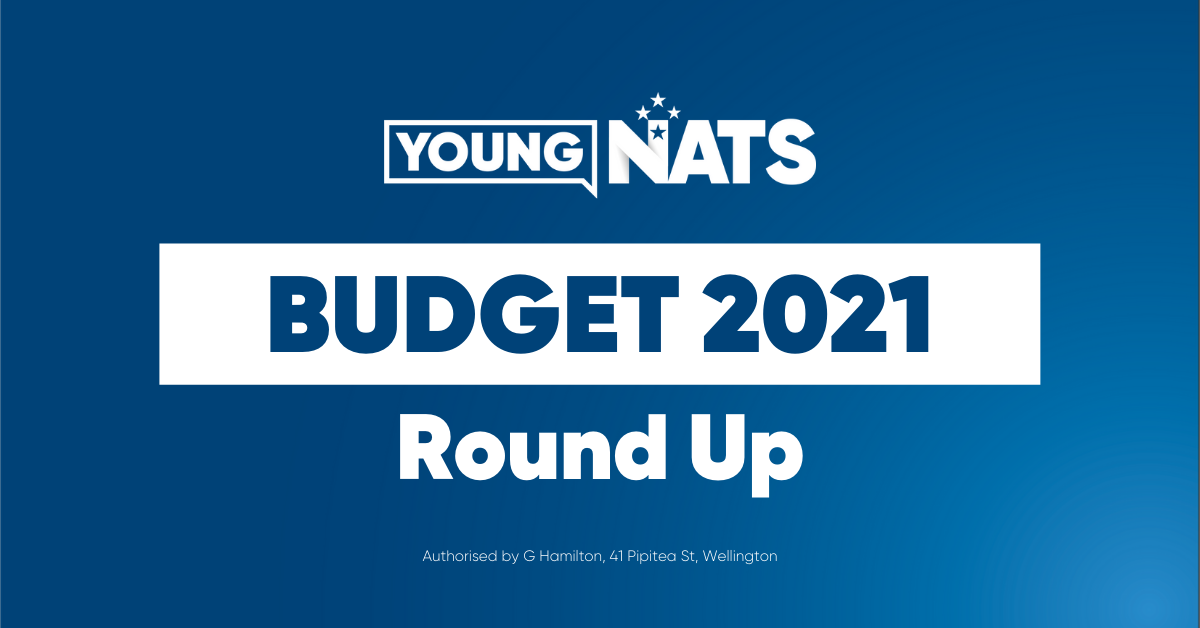 Earlier this week, the Young Nats published our top policy priorities we were looking for in Budget 2021. This included improved access to mental health, action on housing, relief from spiralling living costs, and investments to boost our economy post-COVID.

Unfortunately, today’s Budget has failed to materially deliver on any of these priorities, letting down many young Kiwis who are struggling to thrive in Aotearoa today. And where there have been new promises, based on Labour’s track record of failing to deliver, we’re not convinced they’ll be able to shift the dial for young New Zealanders.

New Zealand’s mental health crisis has continued to worsen in recent years, with access to mental health care plummeting since Labour was elected in 2017. Despite allocating $900m for mental health in 2019, the Government has only spent $130m so far. Meanwhile, wait times for treatment have increased in 17 DHBs, with some as much as 50 per cent longer in 2021. Mental Health advocate Mike King has also publicly blasted the Government for their inaction recently, saying he is “disappointed and embarrassed by the state of mental health support today.”

Sadly, today’s Budget provides no new funding or initiatives for mental health. Young Kiwis will be rightly disappointed, as urgent action is required to ensure the Government can start delivering on their mental health promises.

The Kiwi dream of home ownership has become a seemingly impossible feat for young New Zealanders. The market is soaring out of the grasp of those looking to take their first step onto the property ladder, yet the Government has stood by and watched for the last four years.

Labour made big promises on housing to young Kiwis - 16,000 KiwiBuild houses were supposed to have been built by June this year, yet they’ve only managed to deliver 872. Meanwhile, average house prices have continued to soar to a whopping $913,209 last month, proving that despite their best efforts, Labour continually fails to deliver affordable housing.

The Government’s big promise in today’s Budget is a $3.8 billion Housing Acceleration Fund, which aims to increase the pace and scale of affordable housing supply. Let’s be honest, this fund sounds like KiwiBuild’s ugly cousin. Labour have a track record of promising New Zealanders the world and at best delivering an atlas.

It’s time to see some real, deliverable action on housing to restore the Kiwi dream of home ownership. Because young New Zealanders deserve it. National’s proposed housing reforms would implement a range of initiatives to get houses built, including immediate RMA reform, requiring all urban councils to immediately zone more land for housing, and providing cash incentives to local authorities for new consents.

Living costs have spiraled out of control under Labour. Young Kiwis are at breaking point, yet this Government continues to slap on extra costs without any hesitation. In the last three years, our rents are up $120 on average per week, while transport and power prices have also risen. These spiraling costs are a direct result of Government policies such as rental market reforms, regional fuel taxes, and the oil and gas ban.

Students will be relieved to know that Budget 2021 provides a $25 per week increase to the student allowance and living cost loan. However, this doesn’t come into effect until April 2022, and won’t even make a dent in the already sky-high costs that have been piled onto students over the last four years.

Unfortunately, today’s Budget provides no tax relief for young New Zealanders who are just entering the job market either. Low income Kiwis are also feeling the pinch from rising living costs, yet there is nothing in today’s Budget for them.

National understands that young Kiwis cannot afford to be an ATM for this Government's flashy policy announcements. National would provide real relief, including slashing several of Labour’s new taxes and rental reforms.

Investments to boost our economy post-COVID.

Cast an eye back to the 2008 Global Financial Crisis: youth unemployment sky-rocketed; privately held debt kicked-up a gear and quality of life took a tumble. The immediate impact is often overshadowed by the long-term effects as young people shoulder the burden of extreme government debt for decades to come. If we believe young people are already underwater with the cost of living now, the burden of public debt has the potential to be next level in the future.

The best and potentially only way to realistically tackle the debt burden we have taken on is to grow our economy. Doing so will provide opportunity for young New Zealanders and enable them to be rewarded for their hard work.

Unfortunately, today’s Budget shows Labour doesn't have any direction for getting the country back on track to prosperity. Its devoid of any meaningful policies to help businesses grow, or of fiscally responsible investments to unlock economic growth.

National understands that to provide opportunity and incentivise young Kiwis to live and work in New Zealand, aspiration and competitive enterprise must be at the centre of our economy. National’s Shadow Treasurer, Andrew Bayly, has said his priorities as Finance Minister would include working alongside businesses to help them operate profitably and pursue ambitious growth plans, publishing a 10-year infrastructure plan (and sticking to it), and leveraging education, R&D, and investment opportunities to double the size of New Zealand’s technology sector.

So what do you think?
If you’re feeling let down by the Government’s delivery for young New Zealanders in today’s Budget, help us make a difference. Join us today.